Day 55: why is the middle interval the hardest

It is just after lunch and I spent the time usefully going for a run, which means I might have an evening doing something other than exercise tonight…maybe… 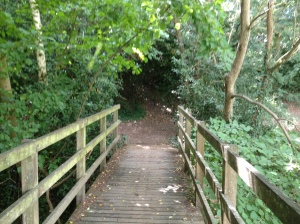 Bridge on my run 🙂

it was week 2 day 3 of my c25k program, and it felt like it was going well, at the half way point time wise I was further round on than I was last time, so I decided to carry on and complete the loop I saw on the map.

I felt better when I was doing this run, and I was better able to complete my run intervals without walking in any of them ( I know that is the point…) I had to stop once to stretch my calves but they were better than the last run and I generally felt I was completing my run intervals better.

I was annoyed with this, I felt better, I felt like I was running faster, it should have been better…grumble, grumble, grump…

however, on further investigation, I have Improved my run pace considerably and the breakdown of the run / walk distances is much better. Last time (well last time the timing didn’t go wrong due to text message) although I went further, I walked 2.47 km and ran 1.01, and my run pace was 8.22 min per km so I actually think running wise this  sessions stats are better…Now I just need to work on quicker recovery as well as the better runs 🙂

On reflection the reasons for the slower recovery could be any of the following or a combination:

It was much hotter

It was just one of those things

I forgot the “brisk” bit of the walk intervals…