My fundamental problem with boxercise…is it is not boxing… but this is my problem…not the classes problem. If I walk into a boxercise class expecting to be taught how to fight, it is entirely my own fault if I am a tiny bit disappointed. Disappointed…but completely knackered…It was a really hard class!

And actually I wasn’t too disappointed really, once I had mentally readjusted to the boxercise nature of the class I had a good time 🙂 It was run by the same instructor as the now discontinued awesome circuits class I used to go to, so I knew that we were going to be worked hard!

To start there was a quick technique recap. Followed by partner pad work in the format: 10x continuous punches / move / 10x continuous punches repeat for about 3 mins then swap over pads and punches.  The remainder of the class was split into 3 exercises, all pad work which is good. The first: pad person at one end of the room, glove person at the other. Glove person sprint across to pad person, pyramid set of jab, crosses interspersed with a squat (2 punches, squat, 3 punches, squat, 4 punches…etc up to 10) run back to the other side of the room 5 squats run back and repeat the whole thing 5 times! Then swap over.

The second exercise was similar, all pad people at one end with pads up for jab cross…glove people run across and punch all sets of pads in turn, sidestep back to the other side lunge across to the start and repeat. The pad people cycled the pads between jab, cross / hooks / body hooks / uppercuts. repeat for seemingly ever! Then swap over pads and gloves. In this exercise I learned some things about the people in my class…I learned that most of the people out there really can’t throw a punch (male or female), I learned that people had a funny idea of where body hooks should go…they are meant to go to your body people…not your knees!! I learned that this is probably not important to the majority of boxercise goers.

The third section gave me less time to judge my fellow classmates which is good really…as I shouldn’t judge people…goodness knows what they were thinking of me!! anyway, the third section was abs…but abs mixed with running which is hard…again one pads one gloves, gloved people do one sit up and punch the pads that are being held, repeat for 1 minute, then sprint to the other end of the room and repeat…repeat the whole thing 4 times! Arrgh…this one nearly broke me!!

All of these exercises were interspersed with a couple of 2 minute rounds of continuous punching just to make sure! and the class was finished with a cool down amble and some stretching. It really is a great class for fitness!! It was extremely hard work and very very cardio!! Worth doing…for fitness!!

So after all that, at the point where I was ready to go home and fall into a bath (in a non drowning sort of way) a body pump class started! A Body pump class that I had signed up for and felt obliged to attend as I had arranged to meet someone in it!!

After all that cardio, a strength class is a good thing, mind you after all that repeated punching, the shoulder track and generally using my arms…and to some extent my legs was something of a struggle! A struggle which in which I triumphed..just about! I am more or less getting my weights sorted out for body pump now…I even rose to the challenge of using my squat weight for the chest track…that hurt!!! 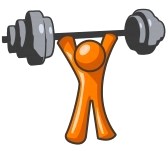 I like a lot of things about body pump…I like the good strength training that you get and I like the instructor, she is the same one who does my pilates class and she is really friendly and remembers things about people which is nice. She is really strong! she uses really high weights for pump, this always makes me feel better…it is good to know that the instructors can do what they are making you do 🙂

The main thing I don’t like about body pump is that it is the same thing every week until the new release comes out. I once had an instructor who would mix tracks from different releases up and I liked that better…it stopped you from doing the same thing week in week out!

It was all good fun and very very tiring! but I can definitely say: