Yesterday evening I had my personal training session that was postponed on Tuesday. I found out the reason it was postponed too, apparently the chief executive of the company was coming to visit Matt’s Gym the following day (he is fitness manager at Steyning Leisure centre as well as my trainer) so…I think, on this occasion, I will let him off 😀

Today Matt decided that we would spend some time setting some goals and some benchmarks against which we could measure my progress. This seems like a good thing to do, it will be interesting to see how much I have improved by the next time I do it. We started with a blood pressure test which was apparently ok, which is good.

we then went through a warm-up / mobilisation series of exercises including walking lunges and odd things where you roll down, put your hands on the floor then walk through to press up position. it was a little bit like the start of a Pilates class…

the similarity ended there as the next thing we did was rowing, after  2 minute warm up that lasted for 4 minutes due to us getting chatting, I was challenged to row 500 m as fast as I could. It turns out that as fast as I could was 2 mins 19 seconds which Matt said was ok…but i think there is probably room for improvement…I’ll have to practice! We then moved on to Chest Press / Bench press where after a warm up, we did as many as possible “to failure” at 30 kg which it turns out was 10 reps… again…not too bad, but room for improvement. Then plank…at which I lasted 28s which I fully admit is complete rubbish…but I was on my toes and elbows…I normally cop-out and go on my knees so I guess that is tiny way to save face! 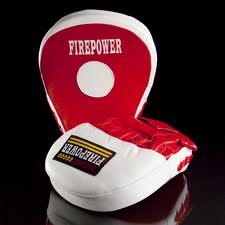 After all this we got on with some boxing, and it was mainly boxing today as Matt had his small focus pads rather than the larger Thai pads, which meant that they are not great to kick as they are small and he ran a much greater risk of actually getting kicked. So to save  damage we stuck to punch combos and defences. I like the little focus pads, they are much faster, which means I have to work faster which is fun…tiring…but fun 🙂 I like Thai pads too as I like kicking…both are good for different reasons 🙂

once we had done (a lot) of boxing, we moved on to core, I had to do the thread the needle move with the ViPR but super slow and only bringing the ViPR up to horizontal not over my head…this was incredibly tricky… then bridges and one legged bridges with my feet on a wall!

Awesome training…not quite as hard going as last week, but still really good 🙂