Day 85: The happiest 5k on the planet…apparently

On saturday I became an official colour runner 🙂 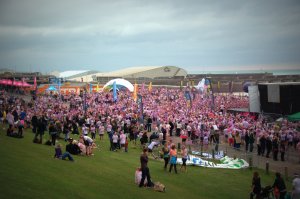 I am in there somewhere! 🙂

The Colour Run (or Color Run as it is officially titled) is billed as being the happiest 5k on the planet! It is a 5km run (or walk or dance :-)) where you are given a white t-shirt to wear which is white at the start and as you run you undergo a “colour transformation” At designated areas along the route, there are stations set up where people with squeezy bottles loaded with coloured powder, cover you in as much colour as possible 🙂 I was quite apprehensive about this, it being filled with other people, most of whom I don’t know…something that is quite out of my comfort zone :-S but, I have to confess to have in an excellent time! The atmosphere was great, and I even (who thought this would happen) enjoyed the running!!

Before the race started, we all gathered in front of a stage where we were warmed up in a manner that bore a startling resemblance to the Joan of Arc aerobics scene from Bill and Ted’s Excellent adventure. Then we made our way (really really slowly) to the start line. We were released in waves and I was in the 3rd or 4th wave to go I think…It was hard to tell but the first people were finishing before we started…The whole warm up / amble to the start took about 20 mins then we were off.

Me after the run…still smiling despite being pink! 🙂

I had set myself a run plan challenge, to run as much of this as I cold but I was going to allow myself short walk breaks if needed…my plan went something like this…

Run 10 mins, walk 2 mins, run 10 mins, walk 2 mins, run 10 mins, walk 2 mins, run to end. This plan went completely out of the window for two reasons…1) there was an unexpected loop about 5 mins in which took us up and back down a steep ramp, which I had to walk some of, and b) it was impossible to run through the colour zones as there was so much powder dust in  the air, breathing was tricky. However, I tracked my runs and walks as best as I could with my garmin gps watch and I completed the whole thing in 37mins 3 seconds of which I think I walked about 7 mins of. I definitely ran big chunks and mostly only walked in the colour zones. This is my best time ever for a 5k so I am really really pleased…and I ran so much more than I walked…the last time I did one of these it was about 50/50 walk run so this is a vast improvement!! 😀

Just in case we weren’t all colourful enough…we were all given colour packets at the end of the race to throw around…my friend Lisa emptied all of her over me…hence the vast amount of pink!

I would also like to thank Lisa for dashing backwards and forwards like a mad thing. between me (who was plodding along) and her work colleagues who were mostly walking some distance behind…she must have gone an extra km!!

SO that was day 85…a colourful crazy running extravaganza! oh and after wards we walked the whole course again in search of lunch!