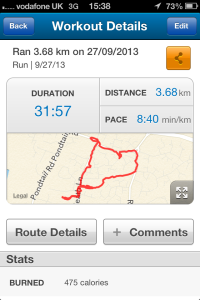 ok…I was slower than yesterday and last week, and I went less far, but that is not worrying me today. I altered the intervals slightly so I could fit it in better, I shortened the warm up…which was probably a mistake but you never know until you try!

I went around my normal route, up through the perilous killer squirrel hangout (although there was a suspicious lack of any creatures there today). Towards the end of the path there is a short (about 100m) steepish (relatively) uphill bit. It falls at the end of my first run interval and I have always, had to walk up it in the past…until today!! Today I made it up and continued running at the top when it flattens out…and actually when i looked at it today, it didn’t seem as bad as it had before! 😀 that was positive number one 😀

the problem is…the longer I run for, the slower I seem to be…or it could be that I was tired from my early morning PT… or it could be just because it is Friday…who knows. I am going to keep at it and finding the positive in every run.  will try these intervals again next time to see how things go and then change things around to keep it varied.

the most amusing thing was my iPhone’s choice of music for today’s outing…it somehow developed a sense of comic timing! Right at the end of the first interval…the one with the hill…my phone chose to play keep on running…which made me smile… then just as I was doing the last 2 mins of my cool down walk…a song whose main lyrics were “it’s almost over now” cam on…this made me smile even more…mind you it has still not played Eye of the Tiger once…I am beginning to doubt that I put it on there…but why would I miss it off!?! anyhow…I digress!