Day 130: Exercise can improve any day…even a tuesday

Ok…It is official…Tuesdays are the very worst days of the week! I am not stating anything anyone doesn’t know by saying that, the Greeks and the Spanish both think it is an unlucky day and if yesterday is anything to go by, they were right! I broke bits off my car by accidentally clashing wing mirrors with a motorhome, who then shouted at me for not stopping…when I was stopped :-S and was therefore 1/2 hour late for work. I lost my documents on the whims of MS word and all sorts of craziness….however…this is not a doom and gloom post because…

Despite my stupid crazy day, my workouts were awesome and made me feel much much better 😀

The first one occurred at lunchtime, I pulled myself out of my grump, went and got changed and went for a run 🙂 I had no plan for the run, I had no intervals set I was just going to go out and go around my circuit with no detours to make it longer, and just run as much as I could and walk if I needed to 🙂

It was quite a short run, and not the fastest average time I have had recently, but I am quite pleased with how it went. I was paying attention to my form, where and how my foot was landing and remembering to push off behind me which meant my run intervals were actually pretty quick, I just slowed down on my walk intervals. I was pretty happy with is as I said and it cleared my head and took away some of the Tuesday-ness!

To be honest…it was awesome 🙂 I know I say that every week, but that is because it always is! 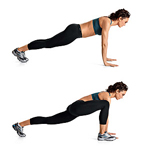 This is (possibly obviously) done with alternate legs and is good for hip mobility (which I need as mine have become rubbish from years of desk working!). Apparently I am improving as I can now get my foot further forward than my hands…It gets easier with every one you do, which I suppose is the point.

We then moved on to TRX, because we were next to it, and also it was on Matt’s list. He had a list, which from my fleeting glimpse at it was very long. on the TRX we I did rows and muscle ups, then Power Cleans with a core bag and on to the not as scary as it once was free weights area. In here we did strength and power training.

Starting with front squats (with 19kg) and then for an initially confusing reason, front squats with my heals on little weight plates. It became clear (because I asked) that this addition was to take the strain off my calves and back onto the muscle groups that were supposed to be being used. We then did bench presses…lots of them, well 3 sets of 5 adding extra weight each time until I couldn’t do more than 5, which turned out to be 35kg. Then power bench presses with only the bar (20kg) which is down slowly, then explosively up as fast as possible. We then moved on to Power presses, lat pulldowns, and multiple kettlebell exercises including snatches, clean and press and bottoms up clean and, walking around with my arm above my head, locked out and my core engaged to make sure I didn’t tip over. This last one is harder than you might think, and there was probably no danger of my dropping a kettle bell on my head!

Once my arms and shoulders were good and tired, we moved on to Thai boxing, at which point I was made to use my brain! MY BRAIN… ON A TUESDAY…oh well…it proved to be interesting and fun! It also produced some new combinations which were even faster and more effective than our previous ones!

I didn’t know it was possible to do these things any faster…apparently it is!

The changes once I had forced my brain to remember them, brought about much more effective combinations, which lead into kicks quite naturally, and now I think about it, kick combinations too 🙂

all in all I walked out in a considerably better mood than I walked in…and with more energy at the same time as being tireder, which on the face of it makes no sense…but if you think about it you will know what I mean 🙂

and do you know what else happened today? W

Well probably not… I will tell you

When I was on the side of the road trying to figure out how to deal with this broken mirror altercation, I actually had the thought, I can’t wait to run and train to clear my head. Not a single thought of chocolate, not one!! 😀