Ok…I apologise for the nonsensical nature of the title…but there were deadlifts and they were awesome (I wasn’t lifting awesomeness as the title implies but shhh), but that will come later…first there was running.

After a hectic saturday, I finally managed to get out for my run at about 4:30pm…it turns out this was a mistake as it is getting dark pretty early nowadays. But all was not lost because I had decided that I might very well want to go to the gym as well as running so I

headed to the park to run which conveniently has the gym in it…by the time I got there it was cold and windy and I was having serious doubts about wanting to run, or go to the gym…but I knew I had to do one…so I dragged my self out of the car and decided to go for a run.Telling myself that if I do planned 40 min run I can just leave it at that if I really don’t feel like going into the gym. I sometimes lie to myself like this to get myself to do stuff…knowing that once I get going I will become more enthusiastic! Saturday was no exception. My run was average, I was doing ok but i had procrastinated for so long that

after one round of the park it was getting dark, but I attempted a second one…only to discover that the part of the path with the worst footing were the parts that were unlit (half the park is lit and half not) so for the sake of being able to see where I was going I turned back and headed to the car to get my change of t-shirt for the gym (see I had such good intentions I was organised).

I headed into the gym did a quick change and went straight to the trx and mats area, I had a quick stretch to loosen my legs after running and then got on with: 2 sets of 10 x inverted bodyweight rows, press ups and body weight squats. I then had no option than to brave the free weights area…I had already don it the day before so had no excuses and on a saturday early evening it only had 3 people in it! I was determined to do real bench presses today using the large bar. So I walked straight in, over to the bench press set up and started by putting the weight plates away from the last person who obviously hadn’t bothered (grrr). then loaded up 30 kg (1 x 5kg on each end as the bar weighs 20gk) I knew I had done at least one set of 5 at 35kg on Tuesday but as I was on my own with no one to spot I decided to err on the side of caution. I did 5 sets of 5 reps. To minimise waiting around I also had a 20kg fixed barbell on standby and in the breaks between sets did 3 sets of 5x front squats. I then swapped to a 25 kg barbell and did 3 sets of 5 x bent over rows. 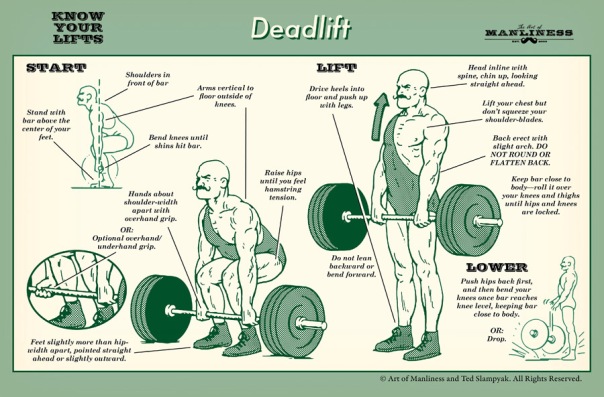 At this point I became incredibly enthusiastic and decided that deadlifts were the logical next thing to try. So I found the smaller bar as it was less unwieldly and loaded it up with 20kg (I think 25kg inc bar) and did a set of 5 dead lifts checking my form in the mirror (which I hate doing but thought I better had). I realised immediately that this was not as tricky as I thought and the weight was too light so I swapped the weights for 15kgs and did 3 more sets of 5 with 35kg (total).

I then put away everything I had been using (I think I might be the only one in my gym who does that) and went to do some stretching! I was very over excited by this point. Being a female doing deadlifts in the gym while all of the other girls are doing little faffy looking things on the weights machines made me feel a little bit like a superhero! And I was very pleased with myself that I managed to walk into the freeweights area and do all of those things without one looking like I was out of my depth and had got lost on the way to aerobics was awesome!

Pretty awesome workouts for such an unenthusiastic start!