Day 153: Thursdays are no longer tricky

I have found my new Thursday night activity 😀

That’s right, on Thursday evening, I went to an adult gymnastics class and it was awesome!!

I did gymnastics between the ages of 5 – 13 and for about the last 15 years I wished I had never given it up but there were no adult gymnastics classes around, and especially no adult beginners classes…

I have no idea what made me Google adult gymnastics, but I did, and I found a class open to all abilities 😀 So I got myself along there and had an awesome time! What is more I took Matt the Trainer with me which was cool. He was not there as my trainer by the way, that would have been odd…he just wanted to have a go at gymnastics. ( I have a sneaky suspicion he has done it before but he said he hadn’t done much…hmmm…). If you take someone with you to a class who is fit for a living I guess it is not really surprising when they are good at things… I was just pleased to not be going on my own! 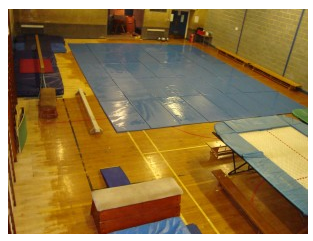 The class was a lot like I remembered as a child, with one major difference:

things that used to be so easy as a child, were now really difficult!!

who’d have thought backward rolls would be so hard! and Handstands…

my goodness, the first one I tried resulted in me collapsing on my head…it was not graceful, I improved slightly,and by go three I managed not to collapse completely, but it is going to take a little bit of time to get that strength back up I can tell you that!

my main success of the evening,  was cartwheels. I was slightly apprehensive about  trying it, I had all sorts of visions of disastrous collapses, but it turns out…

I can still do cartwheels 😀

My first one was a bit shaky, but they improved all through the evening 😀

This is going to take some practice, and some considerable arm strengthening…but it is so much fun 😀 We are definitely going to go back 😀