Last night was the second of my gymnastics classes…it hurt more than the first one!

It was still a lot of fun, and I can still do cartwheels, albeit slightly more painfully than last time. Maybe I stretched more before I started last time, maybe I stretched while doing the cartwheels more this time, I am not really sure but I am sure with practice it will all come together.

This week we worked on tumbling :-S now when the coach said that, I was immediately terrified because the first thing that springs to mind is of course those very complicated routines you see in gymnastics competitions…

That is tumbling, it is just far more advanced tumbling than we were doing! Tumbling just means linking moves together so our tumbles were made up from forward and backward rolls and cartwheels. 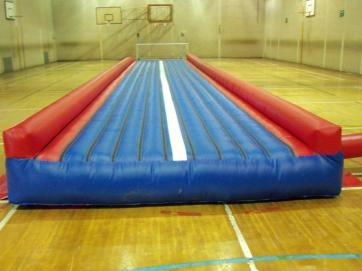 To help with this there was an air track, which was like a long firmer than average bouncy thing filled with air.

We used it to warm up on and do some exercises, we had to jump along it and run along it and crawl along it using only our arms to pull us…that last one is hard…you wouldn’t believe how hard until you have tried it! We were not allowed to use our legs at all it really focussed on abs and shoulders :-S

There was one section where we could begin to fling ourselves around if we liked, that was when the coach was asked to teach free cartwheels. That is cartwheels without using your hands! It looks very impressive, but I decided it was a little beyond my abilities at this time! Matt tried it mind you, and nearly succeeded, although it was not the most graceful free cartwheel ever and there was a degree of falling over. I was pleased that I stuck to putting my hands down 😀

It was lots of fun, and I definitely learned some things. The main thing I learned was: do not skip tea before you go to a gymnastics class…make sure you have enough fuel to get through the class or your legs will go shaky and doing cartwheels will hurt!

with lessons learned for next time 😀 day 160 complete