I may have mentioned in the past, the futility of asking to do something when I am ready… I am one of life’s great faffers so ready is much later than people think.

The other problem with this, is people say…”when you’re ready, when they mean…now”

Apparently I am too literal. 😀

This morning was the second weekly Wednesday morning PT session…this is becoming a habit, although I believe it take more than 2 goes to make a habit. Despite the earlymorningness and my lack of being awake at all it was awesome 🙂 although we do seem to do things that I have never seen another person doing…ever…anywhere…but that is ok I like to be different 😀

After a warm up.,..there was skipping…yes more early morning skipping…I started thinking I had improved from last week, then went through a series of repetitions of jump once land on the rope, before I got the hang of it again 😀

Then there came strength training we did a circuit consisting of:

then a second circuit of

Lat pull down (12 x 30kg 12 x 40 kg (assisted)) Press ups with one hand on a medicine ball…then switch hands and repeat x 8 (i think), and face pulls which i more or less did until I was told to stop because i forgot to count.

Judging by the amount of hits it gets when I do  a google image search, the medicine ball press up thingie is not uncommon! While good to know…this does not make it any easier…

then a third circuit of:

TRX leg curls (yes…I had my feet in the straps of the TRX :-S), TRX Muscle ups (which seem much harder now I have to do them properly…), TRX chest flys with my arms at different angles and incorporating the thing where you do a fly with one arm and a chest press with the other which is much harder to make your brain comprehend than it is to actually do, Mountain climbers (slowly) with hands on the handles of kettlebells, and things in which you have your hands on the handles of kettlebells, press-up down, rock forward, then backward then back up again :-S. I think I did 8 or 12 of each on both rounds but completely forgot to count… 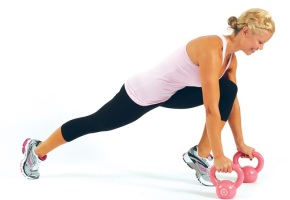 Yes, in the middle of that last circuit you did read kettlebell mountain climbers…yes they are as hard as they sound. The picture does not quite tell the whole story…for one thing…there was considerably less pink…in fact no pink at all (it was important for you to know that) the other things that are important are…1) I did not put my foot down near the kettlebells…foot up, toe pointing, and b) I actually had my wrists and hands and arms in a straight strong line, not tipping in like these seem to be…

all of those circuits were done through twice…did I say that? well they were anyway…

After all of this, just when I could barely move my arms and shoulders, it was time to start punching things 😀 when I say things…I mean Matt! (no not actually punching him…that would be a little mean, his pads.) We started off with the focus pads and I could hardly move my arms…but I got going and it was all ok 🙂 punch combos, some elbows and knees. Then we moved on to the Thai pads and added in more kicks…lots more kicks 😀 We strung together some long combos and…amazingly considering the hour, we both remembered them most of the time. My new favourite thing is the switch kick…you switch stance and immediately kick with the new back leg, the stance switch builds up momentum so you can kick with much more power…which is awesome 😀