Well what a Wednesday it was 😀

Wednesday morning has taken over from Tuesday evening as PT time, and it is much better because we get access to pretty much any piece of equipment we need, the dance studio is free for boxing craziness and there are far fewer hecklers…

Better that is apart from the getting up at 0530 because it takes me at least an hour to be awake enough to drive anywhere. But it is still better, and it is a good way to wake up and be less sluggish during the day 😀

The very first thing to do in a morning PT session is warm up, which I did on the cross trainer. Followed by some mobility waving about of arms…ok…there was more to it than that, but I am sleepy now too so I can’t quite remember what 🙂

In no particular order I did:

Pull ups where you start in a squat under the trx and pull up without using legs.
TRX rows
Chest Flys
Things where you do a row/ pull up, on one leg, then step forward on the other leg and go straight into a chest press, then back again and repeat.
Things where you do Bicep rows to vertical on one leg then step forward into tricep rows and back again and repeat.
Narrow armed press ups
Jackknifes
Pikes
Press ups where you have one arm on the floor and one arm in the trx, the floor arm does a press up and the trx arm does a chest fly.

Then there was handstand practice, which is still the facing the wall walk up with your legs kind and not the kick up and look impressive kind…but I still did it 🙂 and any sort of handstand increases awesomeness…as I have said before 😀

Then we adjourned to the dance studio for (no not dancing…) but for thai boxing…and something billed as 360 defence, which I have since learned is a Krav Maga technique. It is pretty cool and involves fending off attacks from a 360 degrees of motion. It is hard to explain without waving my arms about…but a picture and some waffle will have to do 🙂 imagine a circle  standing up in front of you with your tummy in the middle you head at the top and knees at the bottom. A bit like a wormhole illustration in a bad sci fi movie directly in front of you… The attack (from another person not a worm hole or an alien(probably…)) can come from anywhere around this circle and you have to fend it off with your arm. It is apparently used to fend off knife attacks among other things, and when you get good at it you fend off with one hand and attack with the other simultaneously. I only managed this a couple of times because it is tricky…and fast!

Once we had done this until Matt’s arms hurt (I had pads on mine, he didn’t (sorry)) we moved on to our more usual boxing combos, with added knees, but no kicks as Matt had his focus pads and not the thai pads. Focus pads are awesome for punches because they are small and fast, but not so good for kicks because they are small and I might miss :-S (no…not on purpose… and not that often…) We also added in backfists and spinning back fists because they (like handstands) increase awesomeness!

And all that before 8am (more or less) 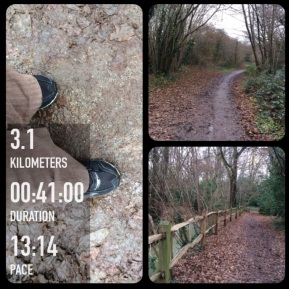 And as I am attempting to up my walking and general activity during the day, I went for a walk at lunchtime. This was also because I wanted to play another episode of “The Walk” I went 3.1 km, and took 41 minutes, and during it, I managed to steal some clothes to disguise myself so I wouldn’t be caught and evade one police roadblock. Ok…that last bit wasn’t real…but it is what happened in the story that the app tells you 🙂

As this is Wednesday’s report, I am sure you are all expecting a dance write up too…but today was the Mythago Morris seasonal celebration (er xmas dinner) and, although we were intending to do a bit of dancing outside the pub, we got rained off…so did the electricity…and we had to eat our dinner by the light of battery powered fairly lights on people’s hats 😀 It was lots of fun!