Following Thursday’s run failure, It was definitely a run day on Friday 🙂

So after work, I high tailed it over to the gym, got changed and (headphones in place :-D) I set off for my run in the park.
I am still running without the “aid” of an interval timer to tell me when to run and when to walk, and I am definitely improving. I am working hard to get over the mindset of “I have run for age, I should walk now” where my brain tells me to walk even though my legs don’t really need to… And I am getting there 😀 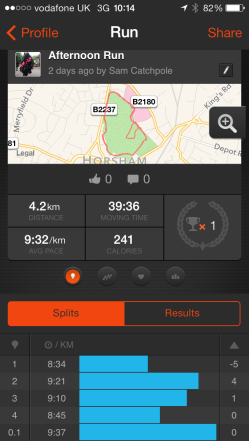 I managed to run beyond the 1 km marker, which (no matter how much warm up walking I do) I have not done since I was doing the c25k 🙂 THe first km was also the quickest, then I slowed down, but then…some how I managed to speed up again and run more 😀 no idea how I managed that but Yeay!

I am also pleased that I managed to go twice around the park. I have planned to do that for the last two runs but always ended up cutting through the middle. This time I went round twice, and then I knew I was only about 400m away from 4 km so I did an extra little loop to make 4.2 km (it was a longer loop than I thought 🙂

I was really pleased, it felt like a much longer run, and I felt like I could keep the running up for longer than my last two 🙂 I am still not back to my pre-break pace, but I think that is partly because of running in the dark…

According to the magic of the moves app, I ran for 27 mins of the 39 mins my run lasted for…this is considerably more running than walking 😀

This breakdown pleases me a lot 😀