Ok..Christmas and New year and all the crazy travelling about and what not in that time has left me slightly behind on this blogging business! Not, however, behind on the exercise thing..you can’t be behind on daily exercise…you either do it daily of you fail to do it daily…and that was not going to happen…

Firstly, Happy new year and all that…I am not making resolutions as such, I am continuing with my June resolutions (this whole project) and December resolutions (the new course…) and I think that is quite a lot of lifestyle change for now thank you…I will add new challenges etc as they happen, so basically 2014…business as usual 🙂

So on with the catch up 🙂

Day 186: Tuesday Christmas eve:
It was the night before christmas and all through the…gym there were people getting in a last work out before the festivities.
Ok…that didn’t scan as well as the original…but it was worth a try.
I was one of those people, which is why I knew that the gym was annoyingly full…but despite that I bagged a TRX and got on with my program. I worked through it 3 times, 3 sets of 5 reps of my program still hard! I also added on the end, 2 x 10 squats and 2 x 10 transverse squats…because my program is hard, but very upper body and core oriented…

Day 187: Wednesday Christmas Day
I intended to get up and go for a run on christmas day, but it was very soggy…so outside world was abandoned in favour of more indoor activities:
Pyramid sets of (1 – 10) Jumping Jacks, Squats and Press ups.
(In case you don’t know…pyramids are where you start with one rep of each in the first round, the 2 in the second etc right the way up to 10 of each in the 10th round. This is technically a pyramid standing on its head…but never mind.)
Pilates Hundred
3 x 10 bridges. 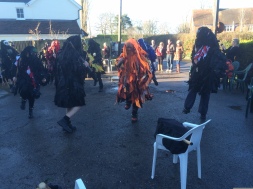 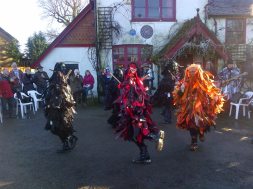 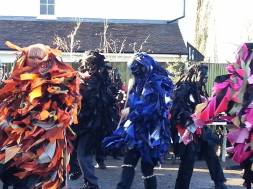 In the UK there is a tradition (that i was not aware of until last year) of morris dancing on Boxing day (for those of you who are not in the UK…Boxing day is the day after christmas day and it is to do with staff and christmas boxes..info) so…this happened.

It was a lovely sunny day and we were dancing at the White Horse in  Maplehurst which is a lovely pub if you are ever in the area. We wore colours, it was very much fun and I occasionally looked like a ball of tatters…there is a lot of material in my orange kit and if fluffs up a lot when I move :-D…any way…I danced:
Maiden Castle, Star of the County Down, Witch Hunt, Triskelle, Standing Stones, Foul Mouth Cat, Fanny Frail and the Broomstick Dance. Not a bad work out on a boxing day…it was nice to get out in the fresh air… 😀

Day 189: Friday, the day I traveled to my dads
As you probably guessed this was the day I traveled to my dads. So there was a lot of time in the car. But before that I headed down to the gym 🙂
It was still slightly busier than I had anticipated, I think Horsham may just be full of gym goers! Any way, I managed to do 3 rounds of my Program, and additional squats. My goal for the next time I go is to do the program 4 times through!

Day 190: Running and walking
This day really deserves its own post, I did both running and walking and took pictures…it is not going to get one though so the pictures will just have to go in here… 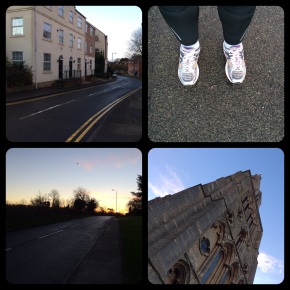 These are some views from my run, it was a lovely day I went out just as the sun was coming up. It was also cold! 2ºC Cold! breathing made my nose hurt. Despite that, I enjoyed myself 🙂

I completed episode 5 of Zombies, Run! I ran for 35.35 mins went 3.53 km with an average pace of 10.05 mins / km. This is slower than I thought, which is possibly due to getting lost and having to go slowly to figure out where I am and stopping to take photos 🙂 As I said, it was a nice run and I enjoyed it 😀

We also went for a walk…we went to a place called Stanwick Lakes in Northamptonshire and walked around the very full / flooded lakes, it was very pleasant 🙂 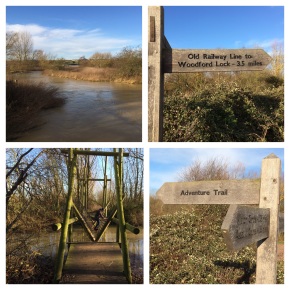 THere was a lot of water around. A couple of the paths were flooded, but we were the most intrepid explorers and were equipped with gore-tex trainers so it was not a hindrance 🙂 We went 4.8km.

Day 191: Travelling back
Travelling back took somewhat longer than expected…there was a little upping and downing of the country in order to track down an Anatomy and Physiology book. Which meant arrival at home was later than expected…which put paid to my gym plans! So in the grand traditions of this project, I stayed at home and broke out the kettlebells 😀
I did an aerobics style warm up, with sidesteps and grapevines and side tappy things and all sorts, for about 10 mins and then:
2 sets of: 20 x 2 handed swings, 10 x 1 handed swings (per arm), 10 x clean and press (per arm), 10 x snatch (per arm)

Day 192: Awesome day of playing in landrovers…
which also took longer than anticipated…and required another home work out.
15 mins warm up on the stepper then:
Superset: Press ups from the app, with 10 x squats in the breaks
2x 10 bridges
Pilates hundred
10 x side raises per side
Crunches (I confess to forgetting how many)

Day 193: Unnecessarily early but awesome PT on NYE
I arranged to have PT at 7am…which was slightly on the early side when I didn’t have to go to work! But it meant I could get on with things for the rest of the day and I had a lot of clearing up to do…
Anyway…did I mention PT was awesome…you probably guessed…it normally is. I am afraid this one is not going to get as full a write up as normal to stop this post getting so long that you all grow old and grey before finishing reading it!
After a warm up, we did an unusual selection of tricky, gymnastics based trx exercises, including (but not limited to), dips, pull ups, trx assisted v-sits, where you lay on the floor, use your arms to pull yourself up to v-sit position, then hold it, lower you legs to the floor, then back up again, then lower yourself to the floor, 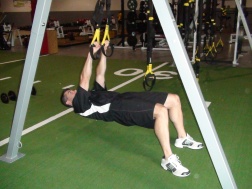 an exercise where you pull yourself up to a table position, with your feet on the floor, your body straight, while holding the trx.

We also did some incredibly tricky things involving variations of press ups on little handles and of course handstand practice!
Then cam the boxing and the kicking… and the slightly too long for that time in the morning combinations 🙂 which (surprisingly) did not end up with anyone getting damaged accidentally 🙂

Day 194 New Years Day
What better way to start off a new year than with some kettlebells! The gym was only open from 11 – 4 which coincided with doing other things, and the weather was drenched as soon as you step out of the door rain so kettlebells it was.
I warmed up on the stepper, I did almost 15 mins and then:
2 rounds of: 20 x 2 armed swings, 10 x 1 armed swings(per arm), 10 x clean and press (per arm)
A super set of  2 x 10 squat press, and 2 x 10 walking lunges passing the kettlebell under the front leg.
2 x 10 bridges, 3 x 30s planks.
followed by my shoulder fixing exercises which I need to do more often!