Happy 2014 🙂 did I say that yesterday, I think I did but the year is still all new so I am saying it again 🙂 Did I mention I am not making resolutions because I feel compelled to keep them…once I wrote all my facebook status updates in Haiku (bad Haiku…) just because I said I would on a January 2nd… Anyway…

The first exercise I did yesterday, is part of my “I must catch up with Rachel’s dad on the way to Mordor” Plot, which reminds me, I need to write a Mordor Update, I’ll do that later…keep your eyes peeled 🙂 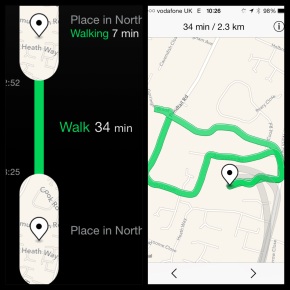 It was a nice walk, I went 2.3 km (as you may be able to see…) It was the first time I had walked any distance in my new rocks for a while, which all adds to the exercise…albeit only slightly! (it is like wearing 1.5 kg ankle weights on each foot!)

I did encounter some evidence of the recent storms…in the form of one puddle…which as my boots have such thick soles didn’t present me with a problem…it did make the apprehensive looking dog walkers give me a strange look mind you… I also got another strange look from a dog walker later in the walk…maybe because it is winter and I was out walking without a coat for no apparent reason like having a dog… but a) walking keeps you warm 2) walking keeps you fit and c) I had my thermal running base layer on! 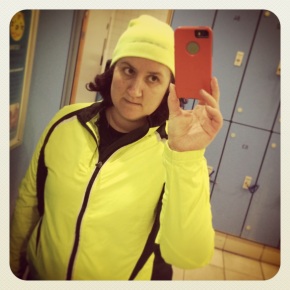 Me looking all yellow and a bit shifty

The second thing I did yesterday was go for a run…I was attempting to decide between running after work and gymming…As I was getting ready to leave work…the rain started…big splatty get all wet rain, so I was erring on the side of the gym…by the time I actually got down to the car, the world was exceedingly wet, but rain was no longer falling, so I thought I would risk a run. One look at the crowded gym through the window cemented my resolve! 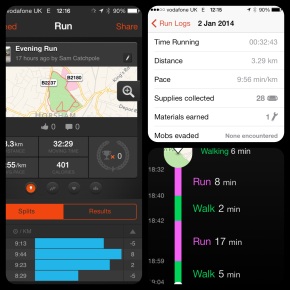 I headed off into the changing rooms to prepare myself, leggings and cropped gym trousers, just in case, thermal base layer, t-shirt and running jacket and a hat…I wasn’t going to get caught out! So dodging the hoards of people heading to the gym, I set out around the park…it was really dark. For some reason it was darker than normal, more cloud maybe or less moon I narrowly avoided running into 2 dog walkers and the hedge a couple of times! THe dark section was so dark that I went the other direction in the second round to stick to the lit bits and then did some wiggles! It was an odd run, it felt hard, my calves hurt I felt slow and like I was struggling, but as it turned out I was quicker  (just) and ran more with less walking than the last one :-D. I have to point out that the 17 min run was not quite accurate, I probably stopped to walk during that time twice, but the moves app doesn’t register walks of less then 1 min…so my walks must have been less than 1 minute…I count that as progress 😀 I completed another mission on the Zombies Run app, and I am almost feeling brave enough to turn on the evade mobs feature, which is a real time chase thingie, which basically works as faster interval training I am just slightly worried that my fast isn’t going to be fast enough :-S

All in all a pretty good day 🙂 and I managed to stay dry which was a bonus!