If only I could consistently get up!

I managed it yesterday, of course, because I had arranged personal training and therefore staying in bed for an extra hour was not an option!

It was worth getting up…

Of course it was worth getting up!!

Who wouldn’t want to get up to attempt to support their entire bodyweight on their arms on some portable parallel bar thingies!?! (I have just discovered thanks to the magic of Google, they are called parallettes.)

ok…I can see the slight look of confusion on your face from here…it was fun I tell you.

yes of course it was hard work! that goes without saying!

I am thinking more of an explanation may be required here… Matt brought in these bar thingies…they are more or less as high as my knees. We took over the dance studio (another advantage of morning work outs) and I had to do:
Press ups on my toes with my hands on the bars keeping my elbows close in.
Slow mountain climbers pulling the knee up as far as possible (which I have to say is easier than on the trx as these bars don’t try to swing to the side when you lift your foot up…)
Dive Bombers with my hands on the bars.
An exercise where I hold on to the bars with my feet behind me (in a down dog(ish) position) then bend my knees and jump my feet forward between the bars until they are out in front of me (it took me two jumps I think) all the time supporting my weight with my arms. Once my feet are in front, I have to do a dip then jump my feet backwards and repeat.
I had to hold the bars, with my feet in front of me and make a table position, which is a little bit like being on all fours only upside down and back to front…
And last but not least (at all) I had to do (attempt to do) a tuck hold! 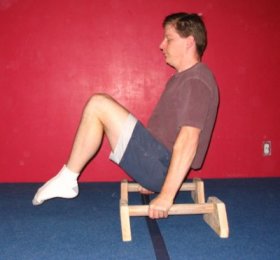 I didn’t technically get my feet off the floor but it was close…ish
well I probably wasn’t that close, but I was closer than I would have been a few months ago…

Once we had done all this…it was time for kicking…and kneeing and lots of it…and no punching…for some reason. But lots of kicking practice which was awesome. The main reason for the lots of kicking was Matt’s big squidgy kick pad which meant that I could kick and knee to my heart’s content with out actually doing damage 🙂

WIth the addition of this bit if kit, as I said I got to kick and knee to my heats content. We did kicks and double kicks (both thai-esque and savate-esque) with both legs, and round knees and front knees also with both legs… including some sort of none stop 10 knees in a row craziness!

Then we did some 360 defence, I know you will know about this if you have read before, we have done it for the last few weeks..if not it is here. It is fun, and I think I am more or less getting the hang of it. Well… I only got hit once and the whole thing kept getting faster and faster 😀

Starting with trx rows, then squat rows, then muscle ups 8 of each without stopping. 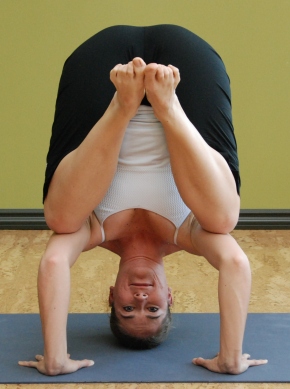 Then we moved on to headstands, well tripod headstands where you (attempt to) do a headstand with your knees on your elbows…It was about 50% successful…

Then I had to roll back to squat…youstart seated, roll your legs back over you head, then when you come back forward, you roll up to squat position…or not…but I almost did it… I was closer than last week… 🙂

then with some dynamic stretches, it was the end of the session. with that on top of a surprisingly difficult body pump, is there any wonder that I am achy!!