Friday was very welcome last week, I can tell you that, first full week of the year at work and all that! However, it was a sunny(ish) day for once and I made the most of it by going for a walk at lunchtime…and getting lost! My sense of direction is rubbish and I managed to get slightly lost in a housing estate trying to use it as a cut through. I have used it before in the opposite direction, but things look different when you are facing the other way! ON the plus side, I got a bit of extra distance in 🙂

The really really ironic thing was, just before I got completely lost, a delivery driver stopped to ask me directions to somewhere near my house, which I gave 😀

Another good thing about Friday (on top of it being  Friday of course) is that I get to finish work early 😀 not very early, but early enough to get into the gym before the rush! So that is what I did.

Matt lent me some small handles which are pretty cool and meant I could do my battle rams and dive bombers on them rather than on dumbbells which have a tendency to want to roll away at inconvenient moments! I managed to (after a cross trainer warm up) bag a mat at the trx, so that I could do my program. I still only managed 3 times through…and eve three times was hard work, Maybe it was something to do with the return to work thing, or the Friday thing, but what ever it was I was tired! That didn’t matter, I did it and it was awesome 😀 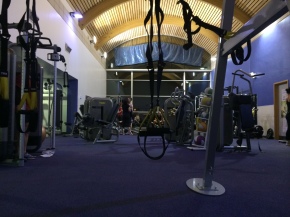 By the end of the session, the gym was getting pretty busy again (even though I have managed to take a picture of it looking empty) although not as busy as last week, I wonder if the January effect is wearing off already…

The other thing I noticed, is about half of the staff in the gym now know me by name! This is a little bit odd and a little bit cool! It also reminded me that at least they know I am not a January only gym goer 😀 (I think I have a slight paranoia head on about that!)

It was a good work-out-y active Friday