For Body pump I mean…

I haven’t gone through all the dumbbells at the gym or the freeweights room…that would be craziness!

Of course it was body pump day…it was Monday and that is what happens on a Monday!

It was a hard work pump and I don’t know whether this because I upped my weights for nearly everything, I am still recovering from not doing pump for 2 weeks over Christmas, or it was a low energy Monday day. What ever the reason doesn’t matter. I do know two things…I upped my weights and I worked as hard as I could so it was all good! 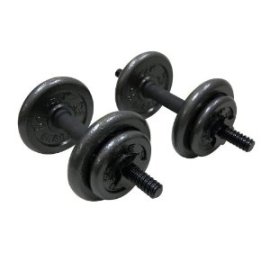 I said a while ago that I might have found a source of heavier dumbbells, well today I was forced to investigate it instead of copping out and using the ordinary ones. It took two of us, and some mining under a pile of gym mats to find another box of dumbbells, adjustable ones so you can change the weight. I settled for 4kg, which is not much, only an extra kg on each arm and it shouldn’t have made as much difference as it did! It is nothing like as much as I could use in the gym, I suppose this is the difference hundreds of reps makes. I am glad I used them, because it made the bicep track into a challenge again for a more genuine reason…more genuine than it is challenging because it is not an interesting track with odd music… I am hoping that the new release will be better. The secret sneak preview of the chest and lunge track is better I think, maybe just because it is different 🙂

Talking of the chest track…the new release uses the bar for the whole track…which means you shouldn’t put your weight up to the level that you could only just manage for the last release where the bar was only used for the first half of the track. Doing this is the action of a crazy person!