On Friday I learned that if an exercise DVD, just for the sake of argument Jillian Michaels 30 day shred, states you should use some hand weights…

apparently it is not talking about 7.5kg kettlebells…

I also learned that I am the sort of person who now enjoys walking in the rain!
I am going to tell you about my rainy walk first 🙂 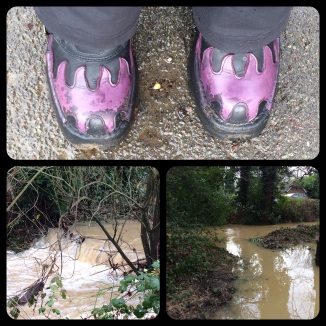 I stomped through some puddles, which were slightly deeper than I thought, and not only came up over the fronts of my boots, but completely covered my feet…I progressed through these fairly rapidly because while my boots are waterproof to an extent, the water started soaking in which worried me a little. Don’t worry (in case you were), my feet remained dry.

I walked a long the side of the stream, which is generally quite small, you can normally see the bottom. only to discover that not only was it a good metre above its normal level, it had at one point burst its banks and was encroaching on the path! It was at this point in the walk, that is started to rain, some more, as if we needed more water!
However, undeterred, I zipped up my waterproof jacket and carried on…I remained nice and dry 😀 and ended up going for 40 mins and 2.6km 🙂

Which brings me to the evenings learning experience…

This DVD is one I had heard good things about. I had heard it is actually a good work out (which some of them aren’t) so I invested a grand total of £5 in it to find out.

And it turns out it is a pretty good work out 🙂 She says some sensible things, and generally encourages the notion that you can get good results if you work hard for them.

I did the level one (of three) workout so I could judge what the levels were like, I think it is doable, and harder than expected, and considerably harder when you do it with 7.5kg kettlebells instead of the “handweights” called for! I think that it won’t be long before I move on to the next level, but I may have to acquire some different weights before then.

All in all, the shred DVD was slightly concerning until I stopped being so literal and admitted that I knew they were not talking about the thing that happens to paper when you feed it through a shredder…

that is not what I was going to say…

All in all, I think the shred DVD will make a good supplement to my other workouts but I have no intention of doing it as my only exercise… I also will probably not manage to do it every day for 30 days…as I have a lot of other exercise going on!