Day 214: A lot of Tuesday morning was spent upside down…

Well…not *a lot* I suppose, but certainly more than you might expect!

I set out to write a description of this morning’s awesome PT session!

We started off with a warm up…we always start with a warm up especially when it is as freezing as it was this morning! then all this happened:

we didn’t actually do all of this…

well not all of it, some of it didn’t fit in to the time available…

firstly on the mat two rounds of 5 of each, dive bombers, which I managed to do all on my toes, not on my knees at all (woohoo for progress) then side to sides…which things in which you hold plan position and move your self from side to side (sounds obvious really when put like that…) I did these on my knees, with my arms slightly bent…because it was harder that way!

Next press up into 1 arm extensions…basically, on you toes (and arms obviously) do a press up then twist to one side and put one arm up in the air. Then repeat on the other side…like

<—- this, only with a press up in between the plank bit and the one arm up bit…

I was relatively surprised that I could so this without too much collapsing, in fact no collapsing at all just doing the exercise as requested 😀

Then some trx craziness ensued… awesome things like:
Baby muscle ups (where you still use your feet a little to help…albeit less than my arms would like) with your feet and body directly under the trx,
Chin ups, from squat position, on tiptoes again so you don’t use your legs too much.
Seated leg raises, which are a bit like a v sit only you hold on to the trx at the same time…although the trx didn’t seem to help at all…

Crow hold: like this but less elegant and successful!

Then more things on the floor (and some on the trx), including:
The crow hold, or actually, one rep of almost a crow hold followed by two instances of me not believing I could take my feet off the floor and not fall over!
Handstand as stated before, to increase my awesome quota..and I held it for about 30s this time, which is ages longer than before 😀
trx pikes, 5x normal, 5x with hip abduction at the same time, and then a variation which involved having 1 foot in the trx and going up into a pike, then bringing your other leg over your head so you start to have split legs… only this proved unsuccessful with the trx, but more successful with Matt holding the foot that should have been in the trx strap!
Either before, or after all that I did a tripod headstand again, I found it easier again than last week…this must be that progress thing that people talk about!

Just in case you think this is enough for one session, we rounded off the day with a short session of thai boxing 😀 We worked on a long combo…well a longish combo it was early and we didn’t want to get confused and end up getting hit. Matt also made me practice punching while going backwards… backwards!! honestly backwards, not a natural thing at all for an aggressive inside fighter such as myself! Coming forwards, now that I can do 😀

Did I mention this was an awesome PT session? Well it was…

Day 214 complete :-D…well complete apart from the walk I went on at lunchtime, which was very pleasant and looked like this: 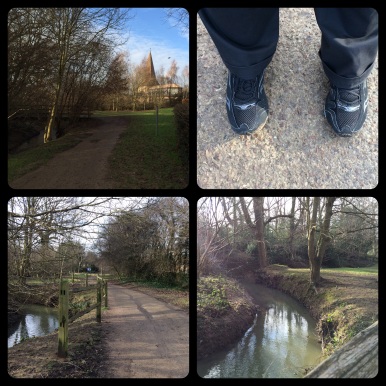