Remember last Wednesday when I did PT in the morning and 2 hours of awesome dancing in the evening?

Well…yesterday was like that, but with extra stuff added!

It started out with PT again. It is an early start, and involves leaving the house at 0630 but it is worth it!

We started off with vipr warm ups again, in the form of thread the needle, clean and press, straight arm lunging swooshy things that involved a lot of coordination for early in the morning, and one other thing that I have completely forgotten due to me having done a lot of things since then (you will see)

We then made a tactical assault on the freeweights area and commandeered the bench and bar
ok…it wasn’t really as an aggressive move as all that…we just walked in really and got on with it…
At this point I had to bench press things…well that bar mainly, first at 20kg as a warm up, then 27kg for plyometric presses…you know the ones where you push the bar up really fast, almost throwing it up…well those. Then Matt waved a broomstick at me.

seriously he did.  Then he made me do overhead squats, like the ones in the picture only I didn’t manage to keep my arms up that high…but I am improving…I guess this is why he made me do it with a broomstick over my head not a heavy bar!

We carried on lifting with the large bar for a while and did:
front squats, High pulls, rows which were fast up and slow down.

We then scuttled over to the cable machine (I know…we invaded before, why we are now scuttling I have no idea…anyway) and go on with: double cable woodchops then face pulls and shoulder extension thingies.

Next a meander over to the TRX for a set or two of Pull ups (from squat on toes) inverted shoulder presses, muscle ups to y shape thingies and press ups.

With a slight hop to the left, some floor based exercises including: Roll up to squat (nearly), Tripod headstands and handstands, dive bombers and battle rams with hands on kettlebells. 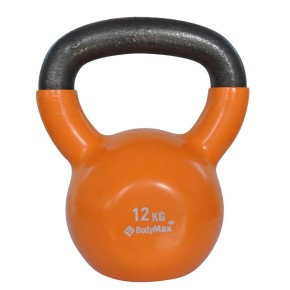 Then as the kettlebells were there…some swings, some clean and presses and some snatches 😀 with 12kg kettlebells I might point out!! 😀
this even impressed Matt, who then said I should go to his kettlebell class to show the people there how it should be done and to stop them complaining about 4kg kettlebells being heavy… which I might do, it is on a Monday, I can go to that  before body pump right?

We finished up the session with boxing, mostly, some kicks quite a few knees but mostly boxing. It was a pretty quickfire session too because Matt had his little focus pads rather than the Thai pads and He got me small, light bag gloves rather than my normal 12oz gloves.
All that happened before 8am (well mostly before 8am)

So…approximately 10.5 hours later, I found myself returning to the gym (albeit a different one) to try a class innocuously named Body Blitz… This, I have to say, was down to my friend Jen who decided we should try it…

Contrary to the sound of the name, this is not one of the Les Mills school of “body xxxx” type classes

But in fact one of the increasingly rare (in this area at least) independent classes, made up (as far as I know) entirely by the instructor. It started a little shakily with what seemed to be a warm up that went on far longer than a warm up normally does, and I then concluded that this was the aerobic portion of the class, it consisted of such things as skaters, high knees and other such things. The instructor was definitely pitching this at a middle level which, looking around the class was fair, there was a high proportion of people in the class who seemed happy with the lower impact versions of the exercises. Of course Jen and I upped the difficulty as much as possible, actually jumping from side to side in the skaters for example.

when we arrived at the class, we were told we would need weights, and just to get a couple of light ones (I suspect there was a tiny little bit of snap assumption going on but considering the class I’ll let him off) so I got 2kg dumbbells. Which seemed acceptable when we were punching with weights, but much less acceptable when we were doing chest presses, at that point I had to dash to the weights and pick up some 5kg plates. I felt slightly embarrassed doing that, like people might think I was showing off…but there was really no point in my doing chest press/flys etc with 2kg dumbbells…
The class progressed into a series of short circuits, using both weights and bodyweight exercises. It did not push me very hard, but, it was one of those classes that you can make as hard as you want by choosing heavier weights for example of doing full press ups etc.

Of course it was Mythago practice 😀

It was a slightly controversial practice, as some members wanted to cancel it due to the bad weather we have been having…others of us decided that the weather really wasn’t that bad and went anyway 😀

There ended up being thirteen of us…which is probably a better showing than last week!

I did a lot of dancing. It also meant that it was a good chance to get new dancers up to speed on some dances and sort out some of the creases in a dance that we have never danced out because id hasn’t quite worked.

It was an excellent practice, and strangely enough the moderate body blitz class worked as a pretty good warm up 🙂

There was quite a bit of walking through and breaking stuff down as we were learning new dances so this is what I ended up doing:

It was lots of fun, and I was really quite hyperactive during this practice 😀

I have to say…by the time I got home I was really tired!

There is an outside chance that all of those things was *maybe*, just *maybe* too many things in one day… fun though 😀