and I feel fine! (and slightly confused…but I’ll explain that later…)

I suppose it would be more sensible to schedule PT and dancing on different days… but they are 12 hours apart… and it makes Wednesday into a day full of awesome!!

The awesome started at 7am with my pre-work PT session 😀 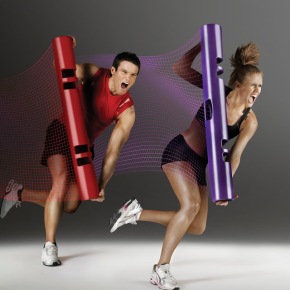 After a warm up and some mobility arm flailing (yes, I’ve told you before, that is the technical term!),  we moved on to a vipr warm up which involved an exercise that matt called digging but that really made me feel like I was standing and paddling a giant canoe! IT also involved sitting in a v sitish position and moving the vipr horizontally from side to side, and Vipr skaters. (at least there was one I knew the name of…)

Once we had done this, and we had cleared away the purple and red vipr awesome lines (as shown) we moved to the cable machine. Which is still very effective despite generating no movement lines of any colour!

Once there I was persuaded that chest flys were a good idea, first with legs in lunge position and then with my feet together, as this will reduce my balance and make me work harder… I did kneeling pull downs which are much harder on this than on the pull down machine (no surprise there…) and double cable woodchops. 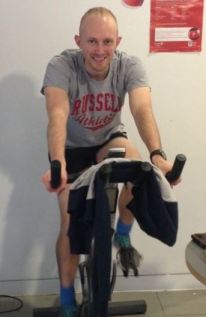 Just thought it was time for a reminder of the person who thinks up all this craziness! I have never actually seen him on a bike mind you…

Of course a PT session would not be complete without using the TRX… so for this weeks craziness I did:
Dips, pressups, Horizontal inverted row (2 x 5 of all) and some hip mobility stretchy things which I mostly failed at because my hips were really tight on Wednesday for some reason!

After this, it was time for the punching and kicking to commence…

actually first of all it was time for the footwork drills to commence…then the punching and kicking..

And that was the way I woke up on Wednesday…

At the other end of the day, was the ideal way to round off an evening…Mythago dance practice of course!!

Practice with an excellent start, and excellent end, and a middle with such confusion that I began to wonder if my brain had melted away, or possibly fallen out during the day and I had only just noticed!

It turned out that this had actually not happened…but that someone decided to explain a dance called (the Beginning and the) End of the World in such a confusing way that noone knew what was supposed to be going on…noone, from people who had been dancing the dance for years down to me who remembered half way through that I had forgotten it, had a clue what was supposed to be going on and I suggested hiding under a table until it all stopped…however, we sorted it out and everything turned out well…fine…after all…it was the End of the World as we knew it…and we felt fine…
(End of the World As We Know It – REM just in case you didn’t get the reference…)

Anyway…confusion aside…the dances I did were:
Maiden Castle, Earth Mother, Witch Hunt, The beginning and the end of the world (x2), Standing Stones, Raggle Taggle Gypsy, Spank the Monkey, Star of the County Down, Sticky Dance (x2) Fanny Frail.