Extra Challenge 6 Update: The one with all the hills…

This is completely out of order, I should really wait until I have caught up on last week’s exercise posts before I tell you about this, as it is Sunday’s exercise…

But I am excited to tell you about it so I am not going to!

Remember when I signed up for a 10k run before reading any of the details and it ended up being a hilly trail run? (not something I recommend by the way…always read the details first)

I arrived at the Start which was at a pub, in the middle of nowhere.

I was on my own, surrounded by people who all looked like real live bona fide  runners! Something I do not look like!

It was at this point I was beginning to think this whole thing was a bad idea, this was not some giant run where 1000s of runners of all abilities joined in whether they normally run or not…this was a 300 person 10k!

Right then and there I nearly burst into tears, turned round and went home! I didn’t however, I spotted Dan instead. You know Dan, the morris dancing person, who is also a qualified personal trainer and owner of Total Fit PT. He was there because he was running the 10 mile race that was going on at the same time! He assured me that I wasn’t going to die so I made my way to the start and stood around trying to look like I was supposed to be there!

Once we got going, it was not too bad, I started to feel ok… you might notice on the  elevation plot, that the first km was quite down hill…I decided not to waste it, and went through my first designated walk break…I didn;t want to waste any down hill if I could help it!

If you look at the up that came next, you will see it was a good decision!…I didn’t walk all of the next up, but it was a hard slog, it started to get very muddy, very slippy and very up…and to top it all off the people from the 10 mile race (who started 15 mins after us) started to catch me up and pass me…

Right then and there, trying not to fall over in the mud, I cried on the side of a hill and thought to myself that this was a stupid idea and I really was not really for this type of run! Coincidentally, at this point, Dan passed me, all fast and close to the front of the 10 mile but despite the crazy run he was doing, he still managed to shout encouragement to me 😀 which did actually help…

what also helped was the turning of a corner onto a more hard packed and less mud-bath-y path! I managed to get going again, and started to run, as I carried on the path levelled out then started down the other side of the hill!

And that is when the whole thing started to get better!! 😀 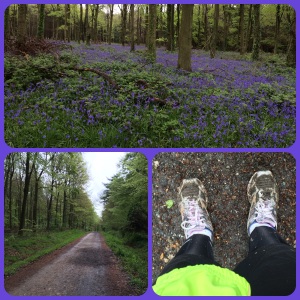 most of this race was pretty…I only occasionally remembered to notice!

The harder paths and lack of crazy up hillness really helped, I took the next 7 or 8 km quite happily, actually feeling better about the whole thing and following my 7 minrun 1 min walk plan more or less…I did alter it around a bit, to take into account the bits where I was feeling better or worse or taking into account sudden uphills but it was all going pretty well! I even managed to stop and take a couple of pictures 🙂

By this point the people from the 10 mile race were passing me again. The had branched off and done an extra loop. This time, I wasn’t so demoralised and despite them running much faster than me, and doing a much harder run than me, a lot of them shouted (or panted) words of encouragement as they passed me which at the end of the race actually made me feel better 😀

As I neared the finish, I amazed myself by still running, at least on the flat bits and the bits that pointed down, but as I approached the finish, a large hill loomed up in front of me. When I took the picture, I could actually see little figures running up near the top so I knew that was where I was heading…It wasn’t long but it was steep!

I had no choice but to walk it! To be honest, by that point I would have been slower if I had run! As I neared the top of this seemingly endless hill (no I am not being melodramatic :-p ) the path levelled and turned off and I could manage to break into a run again…cheered on by Dan and his running friends who had already finished 😀 I rounded the corner into the finishing funnel, to be hailed over the loud speaker as the last runner from the 10k race and had my number called…I quite wish they hadn’t done that as I was hoping to sneak through!!

look quicker than practice even with the stupid hills 😀

across the finish, still running 😀 awesome!! I finally checked my time and discovered that I had knocked 10 mins (more or less) of my fasted ever 10k time which was done in 2010 on the flat!

I was so pleased at this point, that I was quicker, had run more  than I walked, and hadn’t died, that I started crying again!

At this point I thought I was last, but I didn’t care…I was only competing with myself!!

I was generally just happy to have completed the course.

later on… when I the official results cam out…it turned out that I wasn’t last!! I can 315th out of 316 people! this made the whole thing even better 😀

I decided a few times on this run that I wasn’t really ready for this sort of hilly, trail running, especially as I had never done either before…
but right at the end, I decided that if you don;t push yourself into things you don;t think you are ready for, you will never actually get ready for them!! Or that is what I keep telling myself anyway!!

Look…Official proof that I wasn’t last!! 😀

so muddy it even went through to my socks!