Day 342: The return of the elastic bands…

It was day 46 that these first appeared… 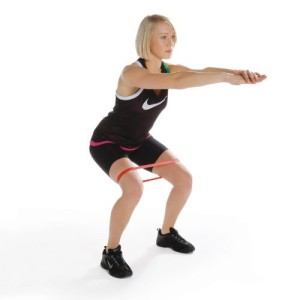 like this…only I had 2 bands around my legs, and I did not do half assed squats

It was last Thursday that they reappeared, firstly Matt waved them at me as a vague threat before I warmed up…and later, I had to squat with them around my legs. I have no idea if they did what they were supposed to, which was increase glute activation, I have been doing so many squats recently that they all hurt elastic band torture or not!

Before all that, I started with the usual amt + flapping about warm-up followed by  spiderman press-ups…which are a coordination nightmare!

Then came the aforementioned crazy elastic band squats…I have to say, I was slightly more graceful putting them on this time…

and unlike last time, noone made me get on a rowing machine with them on!

as I have mentioned before…I do not look like this!

next came strength, starting with a mini circuit of two rounds of cable machine straight arm pulldowns and core holds.

(that is a personal best just in case you are new…)

my elation was short lived, as this triumph was followed up with some tabata!

one round of alternating:

Burpees with sideways tuck jumps
side to side lunge jump thingies

I have to say those burpees make me feel like a complete beginner…I can’t even remember how bad I felt doing them before I got fitter!!

The last 25 mins of the session were dedicated to boxing. another session with Matt wearing gloves as well so it felt much more realistic. This time he had his body armour too and I could hit him 😀