and it is mostly in my head!

Following in the footsteps of Nancy from myyearofsweat (yes I do that a lot…she inspires me often!) I have been doing a lot of thinking recently about my own interpretation of other people’s actions, and I have to admit there is an outside chance that some of the things I believe about people are really a form of projection.

Definition: Projection is a type of defense mechanism. In projection, a person experiences an emotion or thought that they aren’t able to cope with. So, instead, they perceive the thought or feeling as if it had come from someone else.

It is just possible that the “sympathy claps” I received as I was running my 10k were actually just claps of encouragement.

Could it be that the other runners are not looking at me and thinking “what the hell are you doing”?

Could it be that the people on the bus are more concerned with their own lives?

Could it be that I am projecting my own fears of ridicule onto these people? 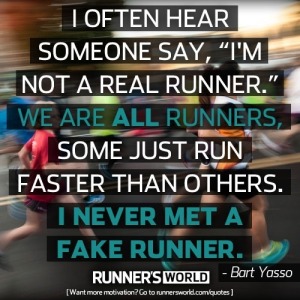 I don’t normally do motivational quotes, but this seemed relevant

now for the amazing thing…

I am not saying I have lost all the negative feelings I have about myself, but realising that I am generating them has made me question them, which in turn has made me start to believe in myself a little bit more. I am starting to believe that you know what, I am a runner (albeit a really slow one) and I have as much right as anyone to be out there running 😀

and the really amazing thing:

It might just be that I have started looking up more…

People haven’t become more friendly, but maybe I have 😀

The other thing I have realised in the course of writing this, is that I only do this when running, I don’t walk around the gym thinking these things about other people, or when I am dancing or in a gym class… but you know what, I used to, and it is only as my confidence in these areas has increased that I have stopped assuming I have to prove myself to the world.

The only person in the world who has doubts about me, is me…and it really is time that changed!!