What a difference (another) year makes…

on Saturday 3rd October 2015 I made myself into a liar again! 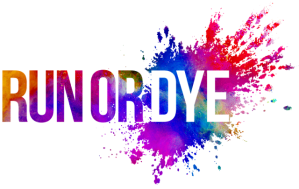 I said once upon a time (here) that I was not going to do and running races ever again. Well…I broke my rule (I do this a lot :-/) and I was persuaded to enter the Run or Dye 5k. you know, the one where they throw paint at you while you run around…

I didn’t feel like the fat one at the back trailing after everyone else, the one who got the pity claps!

I almost enjoyed it!

I ran much more of it than I expected to, considering I have only run 5 km twice since march! A massive part of both my enjoyment of the event and my walking less is down to the two awesome people who I did the event with! They kept me going and insisted that we all cross the line together despite them both being better than me! 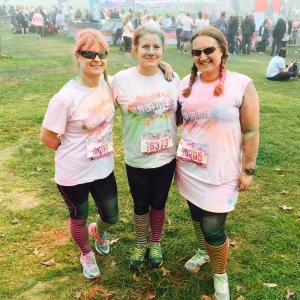 the awesome Sarah and Karen (and me…)

I might not rule out all running in future, I know it is never going to be my thing, but it is a useful cardiovascular exercise, and at least you get out in the fresh air when you are doing it. Unless you are at the Run or dye event as then it was about 75% fresh air 25% dyed powder stuff…

THe other thing that came out of this race, was an opportunity for me to update my “run or dye/colour run update photo series…

I have done one of these every year now since I started this get fit campaign and last year was amazed at the difference! I have to say this year I wasn’t expecting to see a difference… 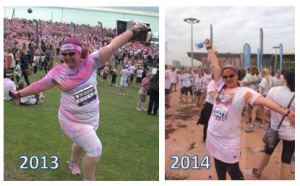 woohoo…running doesn’t suck as much as i first thought!

#thisgirlcan run after all

(no I am still never doing another half marathon!)