Insane in the Membrane

Insane in the brain!

If you follow my Real Fitness Sussex blog, you will know that I totally stole the title of this blog from there but it is appropriate and I am not one to let go of a good pun or 90s music reference!

(Mind you…I have just read the lyrics to the song Insane in the Membrane, they make no sense!)

Time to get back to the point…

what was the point?

Oh yes the craziness that was the day that contained my Insanity Instructor workshop!

The madness began with me being woken by my alarm at 4:30 am (yes really 4:30!!) and me rebelling against it and not getting up for another 15 mins! But still dragging myself out of bed at 4:45 on a Friday morning is definitely lunacy of the highest order!

I banged around and floundered my way through cat feeding and coffee making and threw together a Skyr, chocolate protein and orange smoothie for breakfast and somehow managed to leave the house without forgetting anything! After only a small amount of getting lost I picked up my friend and fellow certifiable instructor, and set off for Southampton!

The reason for this inhumanly early start was that it takes 2 hours at least to get to Southampton, and the workshop was set to start at 8am!

8am?? They expected me to be energetic at 8am?? This did nothing to ally my fears about the possibility of my dying on this course! Or, if not actually dying, then looking very stupid and being told to go away and come back when I was fitter and looked more like an insanity instructor should!!

Apparently I was not the only one…Sarah has similar (totally unfounded) fears and it turns out the way to forget about these fears and just get on with the course is to take a friend with you…a policy I shall be employing as much as possible in future!!

We arrived without major incident at EasyGym Southampton and even found a parking space near the door in case of serious jelly legs after the course. 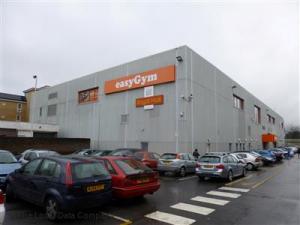 This is Easy Gym Southampton, it shares a building with the post office, they are separate inside though, don’t worry you don’t have to run on the conveyor belts leaping parcels and whatnot! I didn’t even know that the Easy people did gyms, I learned something even before my course kicked off!!

Once we had found our way through the giant gym to the relatively small studio where we were having our course, we met our fellow participants, who were a mixture of Yoga practitioners, body builders, strength training aficionados and insanely bouncy PE teachers. We also met our improbably pretty, enthusiastic and Australian Insanity Instructor and Beachbody Master trainer! Much to the annoyance of those out there who want to write people off as stereotypes, the participants and the trainer were lovely people who didn’t seem to be judging my lack of typical trainer looks at all 😀

Here is my trainer, and the other course people, and my feet…obviously!

At least if they were, they didn’t show it which was nice of them 😉

The other interesting thing about this course was not everyone on it had done Insanity before! At least I knew what I was letting myself in for a little bit!

Predictably, the very first thing we did was a whole Insanity Live Round 16 class 😀

I was dreading it, I thought I would be the worst in the class, and collapse and not be able to do it…

b) I am much fitter than I used to be…

About half way into the first block of the workout, so about 8 mins in…I remembered that I wanted to do this course because I really enjoy the workouts!! I wasn’t forced into it, I knew what I was getting into and I blooming love the workouts even thought they are hard…

…Possibly because they are hard!!

After I remembered this, the whole course was a lot more fun and a lot less scary!

And what is more, I wasn’t noticeably less fit than others, I was less bouncy than some and less bendy than others but not ridiculously out of my league 😀

After we had gone through the whole class, we were taught how to break the class down and teach it. The class has a warm up, 4 blocks, a dig deeper challenge and a cool down/stretch. Each of the blocks consists of a set of 4 exercises which you do for 30s each three times over with a power move at the end of the block. We were taught how to teach the blocks effectively and safely, and we were shown what to focus on in each repetition. We were also given pointers on how to take legitimate breaks in the blocks (by giving modifications and moving round checking on form etc) so we could look like we weren’t broken at the end!

It is important, as an instructor to look like you can at least complete the class 😉

I am going to have to channel my inner Shaun T

We practiced each of the moves individually and teaching the blocks to each other in groups. I was very much fun, but I feel I lost the plot a little (a lot…) towards the end when we had to do the second round of the block where we have to say what we want them to do, how we want them to do it and why: I actually used the motivational phrase ” go deeper for some reason!”

I suspect I am going to have to come up with something better than that when I do this for real!

All in all it was a fun day, despite getting soaked on the way to find coffee…

coffee is essential, no mere rain will stand in my way!!

and the most important outcome of the day was we all passed 😀 we can now call ourselves Insanity Live Instructors and teach actual people the actual work out 😀 woohoo!!!

Note to self, look forward while jumping not down!

It was, as I have said, and awesome day, and another one of those “If you told me I 3 years ago that I would be doing this I would have laughed…” moments!

The down side of the day was the fact that my car broke down on the way home and left the two of us stranded on the side of the road…twice…for 5 hours… I am trying not to focus on that though!!