In general, trust your body’s mechanism for removing waste products and toxins from itself. 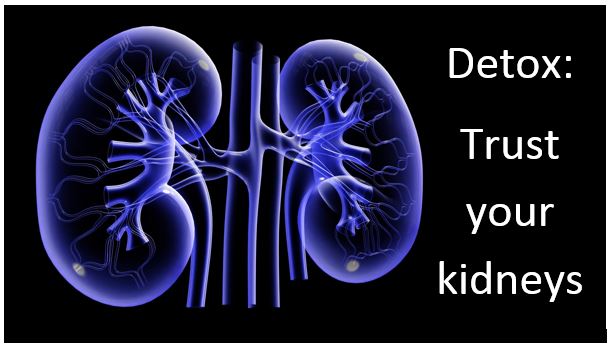 Your body has evolved over thousands of years to be really efficient at getting rid of things that are toxic to it.

It cleans blood and produces waste products and in extreme cases reacts violently against toxic substances by making you sick.

If you have toxins in your body that your body can’t get rid of in a day (or 2) then you are ill…get to a doctor. Juice and smoothies and fancy green tea will no help you!

Don’t believe me? Consider this…

Have you ever had a hangover? you are sick and you feel awful, that is your body’s reaction to toxins. Have you noticed that hangovers rarely last more than a day and generally only a few hours. This is true even after periods of over indulgence like christmas. That thing where you feel better after a day is your body getting rid of toxins and getting back to normal functioning! The only thing extra juice will do in this situation is help you be hydrated and give you some sugar which will generally make you feel better.

Companies that are producing juice cleanses, detox diets and such like are quite simply after your money. You can’t use a juice diet to reset anything…apart from your bank balance and toilet paper supply…

They claim you will lose weight…ok..you probably will…

This is because you are not eating food. You are severely restricting your calorie intake and essentially starving yourself. On top of that, the effect of a considerable increase in fruit and vegetables in your diet has a well documented effect…and not a pleasant one! There is a very real possibility that  you will gain it all back again mind you …

If you do a juice cleanse or a fancy tea thingy cleanse or a cleanse that involves you drinking water with cayenne pepper in, it is very similar to saying ” I am going to starve for 3 days, and take laxative…”

If  you put it like that is sounds a little different doesn’t it?

What would your reaction be if someone said that to you?

Don’t get me wrong, I am not saying that people who do cleanses have eating disorders, that would be alarmist and a little on the rude side. I am saying that taken in its rawest form, these cleanses have a lot of similarities with eating disorders and can promote an unhealthy attitude to weight loss. The fact that this sort of extreme diet works in the sort term can lead people to extending the process and doing these things again and again. In the long term, this is not a healthy approach to eating, and in extreme cases can be a stepping stone to other disordered eating patterns. Taken to the extremes these diets lead to the same side effects as any severely restrictive starvation diet

I am not the only one who thinks this:
http://blog.timberlineknolls.com/2014-01-11/blender-addiction-when-juicing-jeopardizes-health/
http://www.huffingtonpost.com/judith-j-wurtman-phd/dangers-of-juice-cleansing-_b_3639400.html

What I am saying is don’t believe the hype and take these things with a giant pinch of (metaphorical) salt! Be conscious of what you are trying to achieve. They won’t kick start your metabolism, they won’t remove toxins any better than your body can, they won’t give you more energy long term, they won’t do the majority of the magic they claim on the box.

After saying all of that, there is one thing that these “cleanses” might do for you. They might well serve as a psychological kick start. They could help you break a pattern of unhealthy eating and mark a change in lifestyle. They can be the mental full stop you need before starting on a new healthier path.

Just be aware of their limitations that is all 😉

11 thoughts on “Dear the world, trust your kidneys!”

The Musings of a Writer / Freelance Editor in Training

cultivating a beautiful and full heart

Words that flow from Me, Sometimes deep and introspective, sometimes harsh and anguished, sometimes languid and sexy.

FIT IS A FEMINIST ISSUE

The Everyday Life Of An Average Girl

I hope that someone sees this page and decides not to give up...

A lifestyle and Photography blog

4 out of 5 dentists recommend this WordPress.com site

The poetry of ineptitude.

A little something for you.

Wellness To The People

But I Smile Anyway...

Musings and memories, words and wisdom... of a working family woman

The ups and downs and sometimes cynical internal and not so internal struggles getting fit.

From Skinny to Buff

Words and Pictures from the Middle East & Balkans

Creating worlds out of words

The Fit Office
Stronger With Caitlin

Take the journey to find your peace with me

A haphazard mix-up of exercise, music, technology and family

Blurring the lines between poetry and prose

A dance blog about a dancer's life.

Time to get into shape and lose that excess weight...

"Every artist was first an amateur." Ralph Waldo Emerson

Run There, Drink That

one poem every day