Day 99: Tuesdays are getting better

Do you remember the time I knew a girl from mars…

Ok…that wasn’t what I meant to say, but I can’t start a sentence “Do you remember…” without saying that afterwards. I can make it relevant though I promise.

My Tuesday, however contained no war. It contained one gym trip for a  PT session, so that was good for a start. After the obligatory warm up I got to do sled pushes (no pulls just pushes yeay!) in a superset with single dumbbell farmers carries. Using a dumbbell on only one side held engage the core, just in case you were wondering 😀 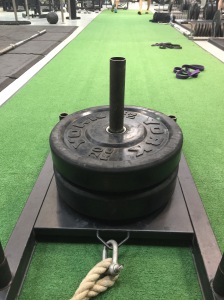 This was all followed by rowing sprints, sprints of 15s and 45s although I maintain that 45s is not really a sprint. I grumbled a bit, but at least it wasn’t a treadmill 😀

not a bad way to start a tuesday really 🙂

Then came lunchtime. Then came running! Yes, more running. It was a reasonably nice lunchtime and I was feeling optimistic so I put on my shiny new shoes and headed out of the door 🙂

It was not a bad run all in all! I had a lot more continuous running at the start and much shorter walk breaks later… I feel like I am improving slowly but surely 😁😁