Well no, I quite like me…I have some arguments with my brain on occasion but I don’t think it warrants a whole new me. After all, a new me would involve giving up all aspects of me and all the things I do. That is definitely not going to happen!

I know…I am not supposed to take it so literally…

But you’ve been  here before (probably) you know literal is what I do!

So, new year new what?

Well I have a new watch, and a new diary, but that is not normally the topic of new year blog posts.

I may have mentioned in past posts that I don’t really do resolutions and to be honest, the notion of overhauling everything and committing to new stuff just because of a new number in the date seems more and more nonsensical the more I think about it. After all, every day can be a new start, or every hour or minute or what ever time measuring unit you chose.

Still, possibly because of the lovely new blank diaries, the new year has become synonymous with clean slates and fresh starts. Social media becomes filled with people talking about resolutions, diets, new activities, new regimes and the like. People share posts about leaving negative stuff in 2019, and moving forward into a fresh new year.

Truthfully, I don’t think this is possible, an old year is not a room full of things that have happened that you can lock the door on…

If it were, you’d be able to do the same with a new day or a new month.

So, I move into 2020, same old me carrying the scars of things happened in 2019, and preceding years for that matter. I am talking about the good and the bad here, so maybe scars isn’t the right term, (whats a good scar? can’t think of an equivalent word) but anyway, I carry these marks with me, they have shaped me and I don’t want to forget them. Don’t get me wrong I am not saying I want to dwell on things positive or negative, that leads to nowhere good… I am saying that I accept these things and move forward with them.

All that being said, I am not against having goals, I am not even against setting new ones at a new year. I just don’t think this is the only time to set them, and I don’t think they should be grand life changing resolutions that would be hard to keep without all of the added pressure of every one asking about them and the like.

So my plan for this year is to set my self some goals, some of which will be relatively smart (you know SMART… specific and measured and all that) and some of them will be more vague. Contrary to popular opinion, vague can be good too, and can become more specific if it becomes more important. 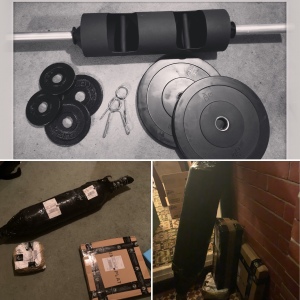 Pretty much all of my training between now and the competition date is going to be geared towards this.

I know (almost) exactly what I need to be able to do at the end of it:
Log press: 40kg
Crucifix hold: 10kg (per hand)
Yoke walk: 100kg
Farmers walk: 40kg (per hand)
Truck pull: one truck
Loading race: carrying three things…

I know when I need to do them by: 8th August 2020 (preferably before but still that is the comp date)

I know how I am going to get there:
Keep litigant up heavy things and putting them down again, also carrying them around. Its ok, I have a program, my plan is a teeny bit more specific than that but that’s the gist…

This is a subset of goal 1 really, I need cardio fitness and endurance to be good at strongwoman stuff and when there is no actual pressure to train for a thing, I actually quite like going out for a bit of a run.
I know to many runners, giving myself a whole year to complete a C25k programme doesn’t seem very ambitious, but it is alongside a lot of lifting and I wan’t to carry on not hating running…

I have no more of a plan than that…

The last goal for the year is not really a goal for the year, but an intention to take on a new challenge every month. I have done it before and I liked it. There is a strong chance the challenges will be related to my goals, but there may be some random ones…who knows 😀