The story of me and running, its a never ending cycle!

So, why am I repeating this saga again…well, I am yet again starting to do some running.  We have had 7 weeks in this year so far and I have managed to go for one run on 5 of them.

I know people who run and people who do the c25k thingy and want to improve at a reasonable rate recommend running more often than once a week (with one off for a cold and one off for it being the first week of the year) but due to my sketchy history with running, I am aiming at once a week for now and if I feel like doing more I will and it will be a bonus! So 5 runs in 7 weeks, I am pleased! I am doing the zombies run 5 k trainer because it is more interesting than the standard one and it tells me stories… then once I have found out what happens I can get back to the normal zombies run… I wonder if I’ll be able to / want to run 5 k at the end of this… who knows, I am not setting myself any expectations apart from, run a bit because I am fitter when I run and feel better in general.

I guess it boils down to the fact that whatever I do, however much I deny it, I am a runner.

Not a good runner, not a fast runner, not an obsessive or an exclusive runner… more a sort of reluctant-ish run-a-bit-walk-a-bit sort of runner, but it counts. 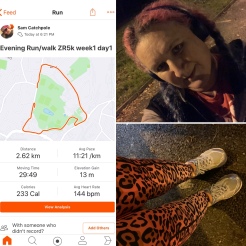